Have a peaceful day!

Recent mural by German street art duo HERAKUT in Paris, France.
The mural is dedicated to kids and is painted on the corner of an elementary school and very close from a high school, so that it could directly address children on their way to school.

“This message goes out to the kids: even though these times make it hard to see, magic does exist (we have seen it)”
– Herakut

“They created this wall to support above all the children who have witnessed the terror attacks of Paris, as a reminder that humans (no matter what age) can spread magic around them. They just have to believe in magic and they will see it. The colors blue, white and red, symbol of France, reinforce Herakut’s support to French kids after the attacks. The mural is located 24 rue Goscinny in the 13th district of Paris, home of Paris street art.”
– StreetArtUnitedStates.com 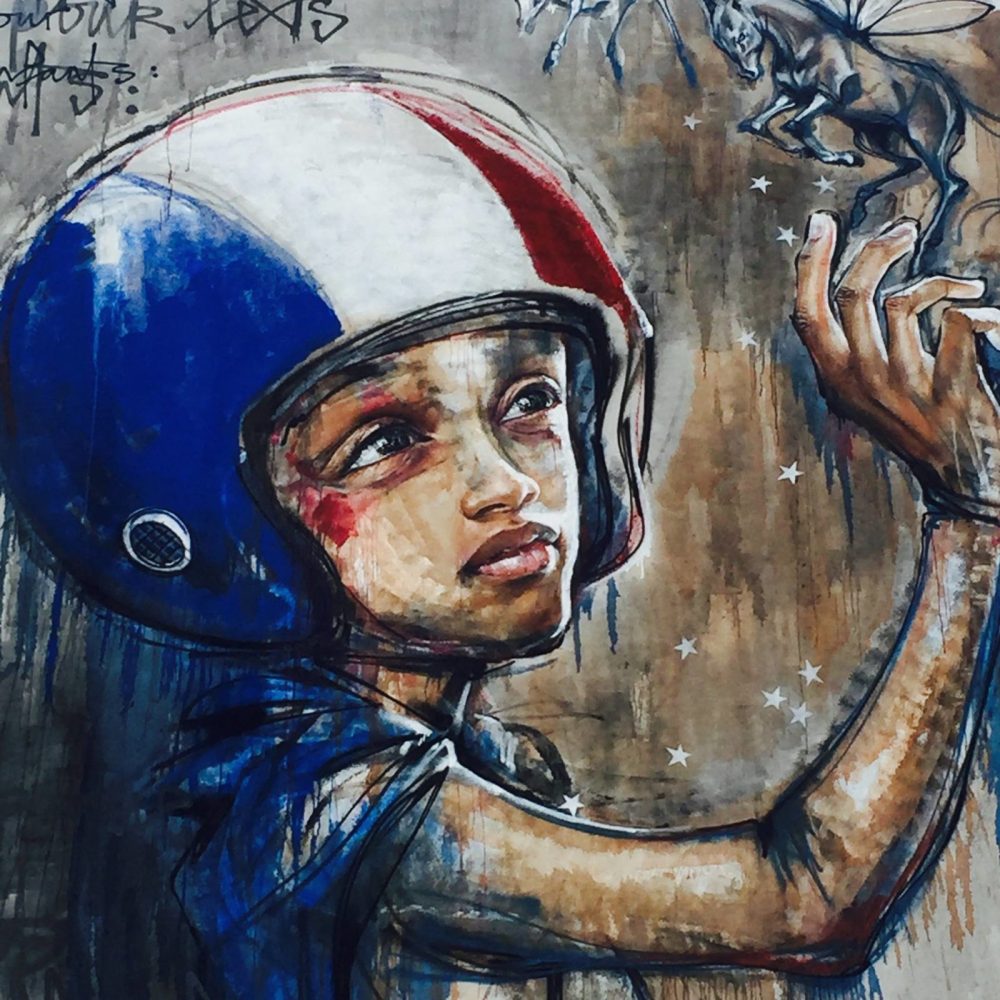 Have a peaceful day!

Have a great day!

Recent piece by Norwegian stencil artist Strøk that can be found on Rue De La Glaciere in Paris, France.
Strøk is known for his multi-layered stencils that create a very realistic image. This impressive mural is no exception, it is very detailed and thanks to the shadows it seems very real. 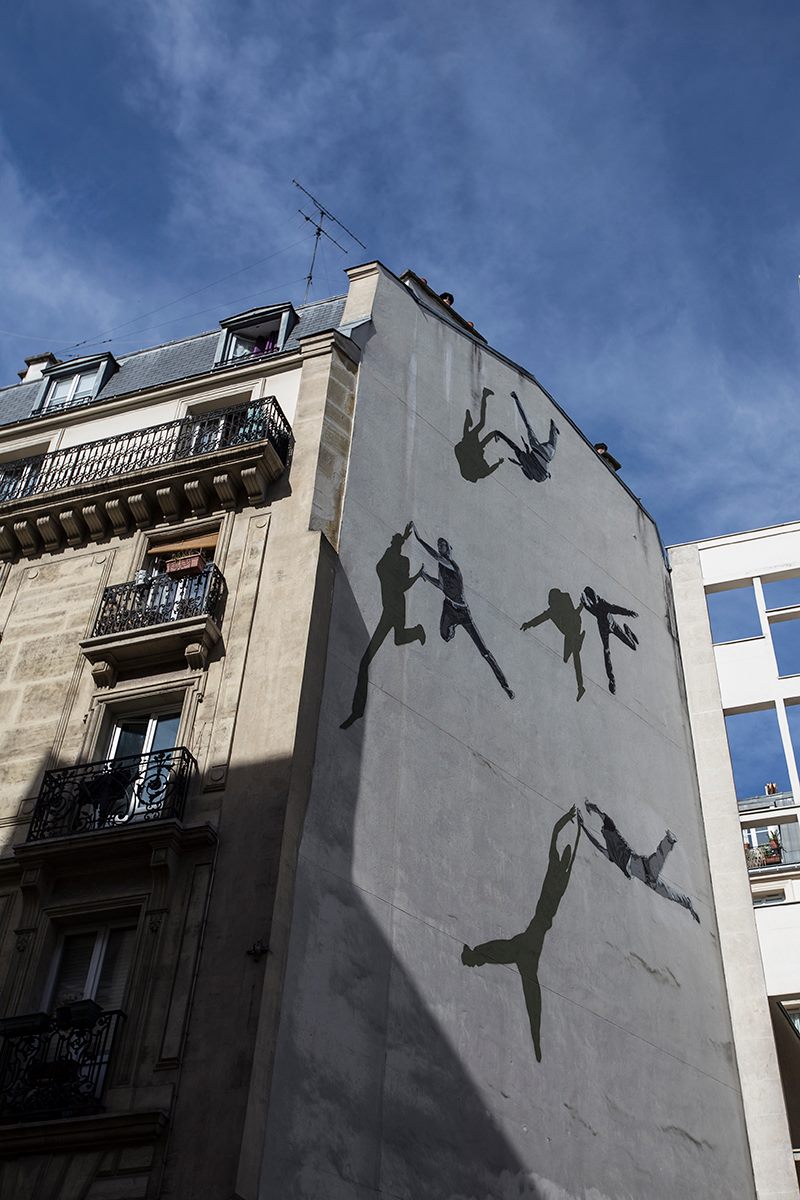 More info about Strøk and his work tomorrow!

A few days ago French artist Ludo created a new mural titled “Flying Scorpio” in the streets of Paris.

Read more about Ludo and his work → here!

As you know from yesterday’s article, Vhils is the tag name of Portuguese street artist Alexandre Farto. He started doing graffiti in the early 2000s and soon after started experimenting with different techniques.
Vhils allegedly gained prominence when his work of a face carved into a wall appeared alongside a picture by street artist Banksy at the Cans Festival in London in 2008. A photograph of him creating the work appeared on the front page of The Times.
Vhils creates his unique wall art by dissecting poster ads and carving into or excavating walls with tools such as etching acid, bleach, pneumatic drills and other processes, to reveal their layers.

Alexandre explains what inspires him: “I try focusing on the act of destruction to create; this is something I have brought over from graffiti. I believe we are all composed by layer upon layer of social and historical fabric. Our social system is the product of this same process of layers, and I believe that by removing and exposing some of these layers—in fact, by destroying them—we might be able to reach something purer, something of what we used to be and have forgotten all about. It’s all very symbolical so take it as a semi-archaeological dissecting of layers of history and culture.”
– Alexandre Farto/Vhils for Wynwood Walls

END_OF_DOCUMENT_TOKEN_TO_BE_REPLACED

Shepard Fairey is currently in Paris, France where created a new installation “Earth Crisis” that is hanging between the first and second floor of the Eiffel Tower. His installation is a giant sphere hung in the colors of our Earth – blue for air and water, green for the vegetation that allows to sustain life.
The mandala images, composed of environmentally themed graphics, are positioned to raise awareness and provoke discussions about the Earth’s future.

“Visible from November 20 to 26, it is a strong artistic gesture to Paris which will be hosting the COP21 world conference on climate change. This was made possible with the help of Gallerie Itinerrance.
The Earth Crisis Globe is a mandala designed to provide a unified ornamental structure that evokes floral motifs and harmony with nature.  Housed within the mandala’s shields are images that symbolize both threats to nature and incitement to respect it[…]”*

(Read more to view other photographs and Fairey’s comment.)

END_OF_DOCUMENT_TOKEN_TO_BE_REPLACED

Street art by Pejac in Paris, France.
More work by Pejac is coming up tomorrow! 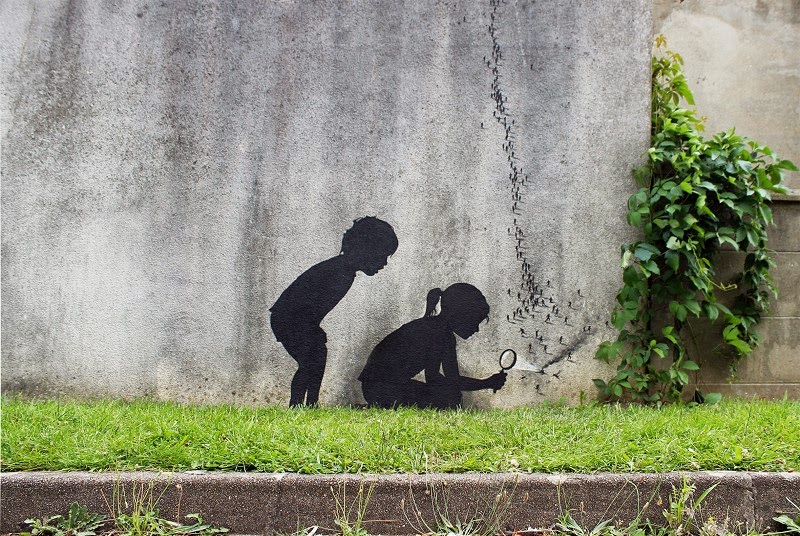 Street artist Combo has spectacularly gotten back at a graffiti cleaner in Paris by incorporating him into his work.
Combo photographed the graffiti cleaner painting over his work and the next day he added a humorous paste-up featuring the same graffiti removal guy. 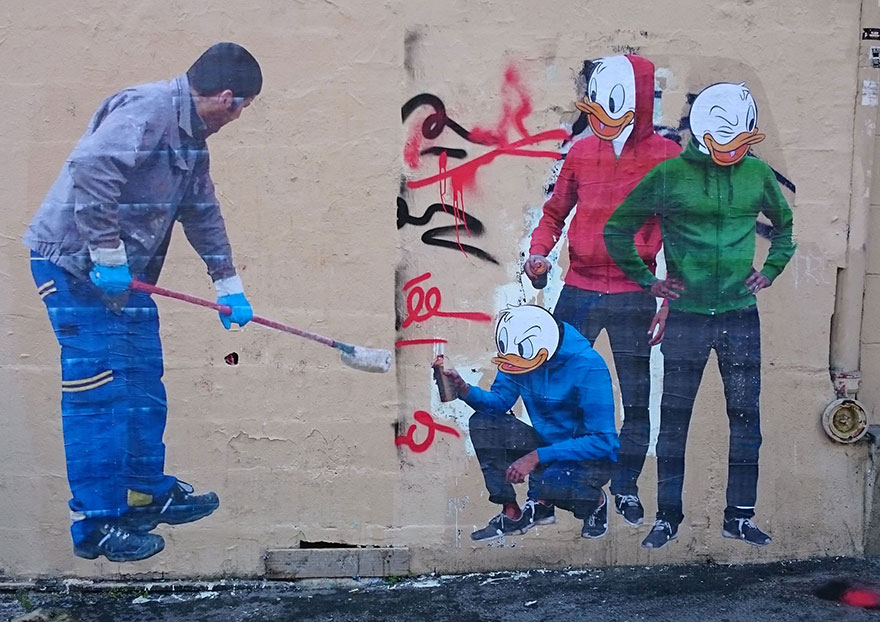 Charles Leval is an artist and teacher in Paris. In his spare time, he’s a street artist that goes by the name Levalet.
Levalet is known for creatively incorporating the surroundings into his wheat paste street art, often using objects already embedded into walls.

Especially interesting is this piece depicting the mythical creature Minotaur. In Greek mythology, the Minotaur was a monster with the body of a man and the head and tail of a bull. The Minotaur was the offspring of the Cretan Queen Pasiphae and a majestic bull. 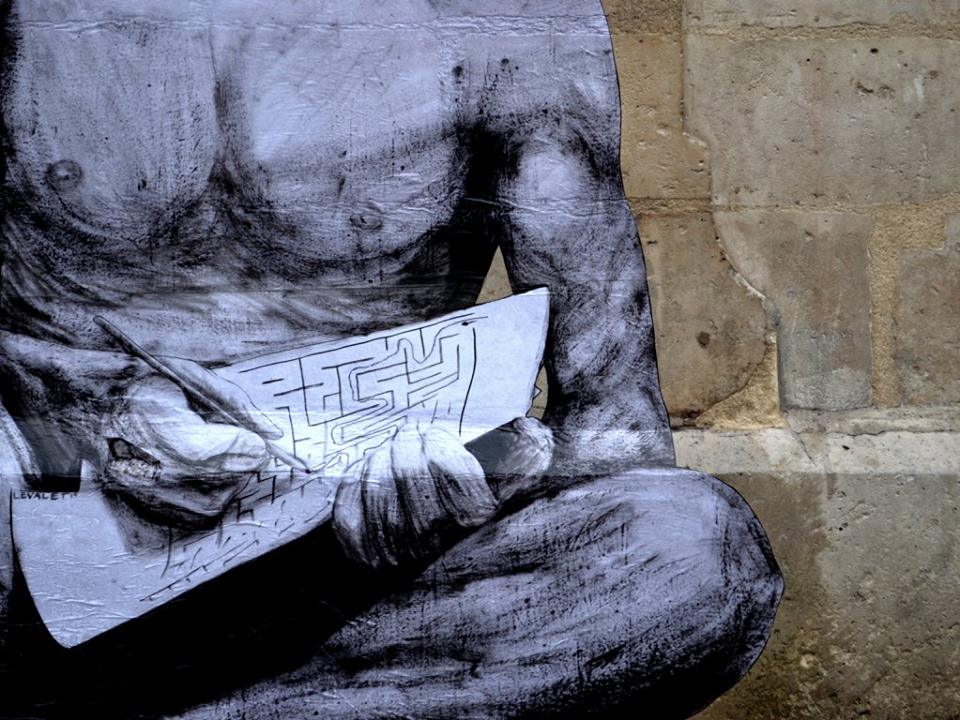 Due to the Minotaur’s monstrous form, King Minos ordered to build a huge Labyrinth to house the beast.
And that is why Levalet brilliantly displayed the Minotaur with a little map of the Labyrith.